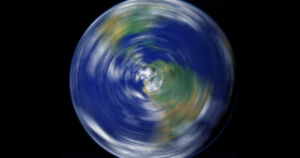 Scientists have made a surprising observation: the Earth’s spin is accelerating. In fact, the Earth is spinning faster than ever recorded lately, as Phys.org reports — and no, that’s not figuratively speaking.

One rotation around the Earth’s axis is the equivalent of 24 hours, or roughly 86,400 seconds. While this period has been largely consistent despite variations caused by the movement of the Earth’s molten core or climate, an accelerating spin may soon lead to the need for a “negative leap second.”

In other words, for the first time ever, we might need to cut an entire second out of the year because the world is spinning faster.

The shortest day ever recorded using atomic clocks was July 19, 2020, as Time and Date points out, lasting 1.4602 milliseconds less than the equivalent of exactly 24 hours. The previous record was measured on July 5, 2005.

Scientists also predict that the year 2021 might end up being the shortest in decades — by a tiny margin, of course.

To bring clocks back into sync, scientists are suggesting we cut a full second out of one day, otherwise known as a negative leap second. It would mark the first time a second has been cut; the last 27 leap seconds have all been positive, a trend that was introduced in 1972, according to Time and Date, meaning that a second has been added.

While the exact cause isn’t entirely clear yet, scientists have suggested in the past that it may have something to do with global warming since melting glaciers could mess with the planet’s distribution of mass, or geological processes far beneath its surface.

Regardless of the cause, the simple act of cutting a second out of a day could end up having disastrous consequences on modern technologies, as Phys.org points out.

That’s why many scientists are calling for a switch from solar to International Atomic Time, which is based on an international network of synchronized atomic clocks.

READ MORE: The Earth has been spinning faster lately [Phys.org]

The post The Earth is Spinning So Fast, We Might Need to Skip a Second appeared first on Futurism.

Utah Authorities Say Mysterious Monolith Is Illegal, Even If Aliens Put It There