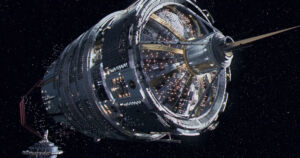 A group of Finnish researchers are proposing a permanent human habitat in the orbit of Ceres, a massive asteroid and dwarf planet in the asteroid belt, between Mars and Jupiter.

According to the team, this “megasatellite settlement” could be built by collecting materials from Ceres itself.

If that sounds familiar to fans of the popular sci-fi book and TV series “The Expanse,” that’s because in that fictional universe, Ceres Station plays a pivotal role as one of humanity’s first human off-world colonies. In the series, however, the space rock itself was spun up to create a crewed habitat on its surface with artificial gravity.

In a paper uploaded to the prewrite repository arXiv this week, the team argues that Ceres would be prime real estate because it has nitrogen, which could enable the creation of an Earth-like atmosphere.

In fact, they argue that the environment could even be “better than Earth,” since there’s no adverse weather or natural disasters, and plenty of living space to grow into.

They propose a number of smaller spinning satellites, attached to each other via magnetic tethers to create a massive disk-shaped megasatellite. Artificial gravity approximately equal to that of Earth could be achieved by spinning the massive structure around Ceres.

Such a habitat would have to make a full rotation around the dwarf planet in just 66 seconds to maintain the artificial gravity.

Connecting each habitat would be maglev train-like vehicles, a weightless experience to passengers.

“When first encountered, weightlessness causes nausea and vomiting for some people,” the paper reads. “However, in a settlement where people experience occasional weightlessness from childhood, it is plausible to think that they can tolerate it well during short trips.”

The settlement could also act as a stepping stone to other reaches of the solar system.

Thanks to its low gravity and fast rotation, the researchers argue that a “space elevator is feasible,” allowing easy transportation of materials from Ceres to other settlements without the need for much fuel.

So what about space radiation and the threat of meteorite impacts? The team has considered those threats as well. They propose a set of massive cylindrical mirrors that could do double duty by collecting sunlight and passing it onto the habitat, while also blocking submeter scale meteoroids.

Former Israeli General: Aliens Exist, and Earth Is Not Ready to Deal With Them

Harvard Astronomer Argues That Aliens Visited Us in 2017

The CIA’s Declassified UFO Documents Are Now All Available Online

SETI: New Signal Excites Alien Hunters—Here’s How We Could Find Out if It’s Real

‘WTF?’: Newly Discovered Ghostly Circles in the Sky Can’t Be Explained by Current Theories, and Astronomers Are Excited

China Is Launching Three Missions to Construct Its Space Station

SpaceX Fires Up Starship Engines Ahead of Miles-High Flight Test