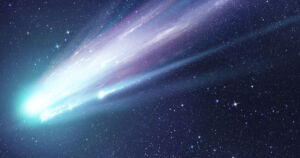 Comets can contain all six of the most important elements for life on Earth, according to new research.

For the first time, scientists say they’ve discovered evidence of solid phosphorus on a comet orbiting the Sun. It joins the ranks of carbon, hydrogen, nitrogen, oxygen, and sulfur that have been found on them before — lending support to the theory that comets may have transported the ingredients for life down to Earth.

The comet 67P/Churyumov–Gerasimenko completes its revolution around the Sun every 6.5 years. Now, researchers from Finland’s University of Turku say they’ve spotted signs of phosphorus aboard it, according to research published in the Monthly Notices of the Royal Astronomical Society.

Including phosphorus, that list of six elements — carbon, hydrogen, nitrogen, oxygen, and sulfur, collectively known by the acronym CHNOPS — make up all the most crucial ingredients for life on Earth.

Even after this discovery, scientists can’t definitively conclude that comets crashing into Earth served as the source of elements essential for life.

But the University of Turku research makes it harder to rule the idea out, now that the CHNOPS list has been completed and we know that the crucial ingredients for terrestrial life can all be found elsewhere in space.

More on astrobiology: Building Blocks of Life Can Form in Deep Space

The post Comets Can Carry the Six Most Important Elements for Life on Earth appeared first on Futurism.