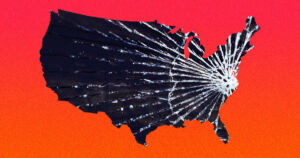 One week after the pro-Trump insurrection at the U.S. Capitol, a majority of Americans seemed to agree that the country is “falling apart.”

That’s according to a new Axios-Ipsol poll that gauged Americans’ stance on the President, the state of the nation at large, and their feelings about impeaching and removing Donald Trump from office. As The Hill notes, about 79 percent of the 1,019 respondents at least somewhat agreed with the statement “America is falling apart” — a grim data point about Americans’ expectations for the future, albeit during a tumultuous moment.

The poll revealed partisan splits, especially when it came to Trump’s conduct and whether he should be held accountable for inciting the riot. But that pales in the face of the qualitative fact that an overwhelming majority of the population, at this moment, sees a bleak or fractured future for one of the world’s wealthiest and most influential nations.

In other words, Americans may disagree on why America is “falling apart,” but the near-unanimous sentiment that we’re in a real mess is still an unfortunate sign for the future of the country. And as they stare down COVID, environmental destruction, deep internal divisions, and extraordinary inequality, maybe they’re right to be concerned.

READ MORE: 4 in 5 say US is falling apart: survey [The Hill]

The post 79 Percent of Americans Say US Is Falling Apart appeared first on Futurism.

Climate Change Will Roast Cities More Than Anywhere Else